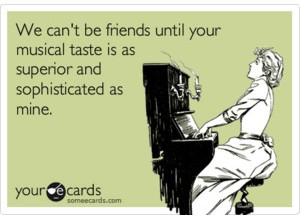 A few days ago I wrote about the way we can show grace to others by not demanding that they pander to our prideful ‘good taste’ (in a variety of areas).
Here C.S. Lewis talks about a related topic, musical taste. Disagreements over the ‘right’ or most godly church music have produced many hard-fought and rarely-won battles. While Lewis’ comments below are a bit of a challenge in terms of the language, it is worth the slog if you can get to his main point. Grace is the key! We must bear with one another in love, bear with things we dislike for the sake of others whom we are called to love, in Christ. If we are in music ministry and find ourselves filled with pride at our skill, or contempt and hostility to the congregation we serve, it’s probably time for a break! It’s probably time to re-examine our motives – and pray for God to work in us for His glory. Blessings!

“There are two musical situations on which I think we can be confident that a blessing rests. One is where a priest or an organist, himself a man of trained and delicate taste, humbly and charitably sacrifices his own (aesthetically right) desires and gives the people humbler and coarser fare than he would wish, in a belief (even, as it may be, the erroneous belief) that he can thus bring them to God. The other is where the stupid and unmusical layman humbly and patiently, and above all silently, listens to music which he cannot, or cannot fully, appreciate, in the belief that it somehow glorifies God, and that if it does not edify him this must be his own defect. Neither such a High Brow nor such a Low Brow can be far out of the way. To both, Church Music will have been a means of grace; not the music they have liked, but the music they have disliked. They have both offered, sacrificed, their taste in the fullest sense. But where the opposite situation arises, where the musician is filled with the pride of skill or the virus of emulation and looks with contempt on the unappreciative congregation, or where the unmusical, complacently entrenched in their own ignorance and conservatism, look with the restless and resentful hostility of an inferiority complex on all who would try to improve their taste – there, we may be sure, all that both offer is unblessed and the spirit that moves them is not the Holy Ghost.”

This was taken from an essay entitled “On Church Music” by C. S. Lewis. It can be found in a current publication called Christian Reflections published by Wm. B. Eerdmans Publishing Co.; ISBN: 0802808697.

Ps. Today I celebrate my 150th Blog Post! Thanks for reading.
Read more about C.S.Lewis on this post: Our Glorious Capital C Church

10 thoughts on “C.S. Lewis on musical taste and grace”