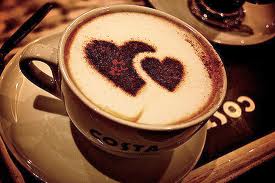 The other day I turned my nose up at an instant coffee made for me from a jar of Nescafe 43. I thought I could justify this ungracious response by defending my ‘good taste’ in coffee, but apparently not, according to C.S. Lewis.

“(Humans) . . .  are best turned into gluttons with the help of their vanity. They ought to be made to think themselves very knowing about food, to pique themselves on having found the only restaurant in town whether the steaks are really “properly” cooked. What begins as vanity can then be gradually turned into habit. But however you approach it, the great thing is to bring him into the state in which the denial of any one indulgence “puts him out”, for then his charity, justice and obedience are all at your mercy.  Mere excess in food is much less valuable than delicacy.”  (Letter 16: Screwtape Letters by CS Lewis, 1942).

Ouch!  If you have never read the Screwtape Letters I would encourage you to rush out and get a copy (or download). The Letters record fictional (but strangely believable) correspondence between a Senior and Junior devil. The uncle instructs his nephew on how to keep his ‘patient’ (a new convert to Christianity) from getting too close to the Enemy

(for them the Enemy is, of course, God).  In the section above Uncle Screwtape explains how to get at his patient, to annoy him, by encouraging the unbearably fussy eating of his mother and her delicate tastes.  If he can make her insist on having her food served in a particular, apparently simple way he will have some delightful amusements. It is also designed to keep her deluded in selfishness and pride.

Here Lewis makes an insightful connection between the “god of the stomach” and pride in our own good taste. This is a much more dangerous distraction from godliness than simply overeating. What I find most interesting here is that he wrote on such matters long before our addiction to both reality TV cooking shows and the great variety of good foods we enjoy in the West (thanks to globalisation). Lewis’ words also come before ‘coffee culture’ swept our world and people became ‘coffee snobs’ – who insist on having their particular bean roasted a particular way on a particular machine in a particular shop, or their own kitchen. I have met people who will rave for hours about having the best taste in coffee and the most knowledge of how to make it – properly! How gracious are they when offered inferior coffee? (How gracious was I?) And it’s not just coffee. Our egos can be fed and mislead by thinking we have the best taste in food and the best skills in how cook it, to create amazing dishes and impress others.

I suppose I am not that far behind the people that I call coffee snobs! I do prefer real coffee from a coffee shop (though not A particular shop) and I do think I have better taste than others in many ways (doesn’t that just sound awful in print)!  The more I think such proud thoughts, the more I train myself to respond to others with less grace, less charity, less justice and kindness. Let’s measure our “own good taste” against God’s measure, of perfect grace, humility, charity and kindness to others. We are more likely to display the fruits of the spirit to others when our hearts are not bent on satisfying our own ‘good tastes’, and proving our superiority in such matters. I’ll keep working on this!