I have some friends who are totally in lo 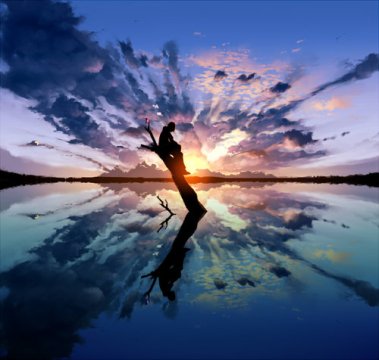 ve with the beauty of the natural world. They ravenously consume nature documentaries and scientific discoveries, and relish the fascinating and amazing laws which exist in the universe. I must say I do share and rejoice in such a fascination! Yet it is possible to be lost, from God’s perspective, even with such an attitude. Linked to this love of creation is the exaltation of mankind, as the crown of creation. As mankind exalts, expresses, captures, ponders, reproduces, learns from and preserves all the wonder of creation, the wonder of the Creator (who in fact made, entered and sustains this creation!) can be, sadly, pushed aside.

Consider these words from John Piper:

“The tragedy of the world is that the echo is mistaken for the Original Shout. When our back is to the breathtaking beauty of God, we cast a shadow on the earth and fall in love with it. But it does not satisfy. The books or the music in which we thought the beauty was located will betray us if we trust to them. . . For they are not the thing itself; they are only the scent of the flower we have not found, the echo of a tune we have not heard, news from a country we have never visited.”
(from The Dangerous Duty of Delight)

His words remind me of those penned by the apostle Paul in his letter to the Romans, chapter 1:  For although they knew God, they neither glorified him as God nor gave thanks to him, but their thinking became futile and their foolish hearts were darkened. Although they claimed to be wise, they became fools and exchanged the glory of the immortal God for images made to look like mortal man and birds and animals and reptiles. . . They exchanged the truth about God for a lie, and worshiped and served created things rather than the Creator

Piper comments further on this ‘exchange’:  How could I put my eye to some great telescope, designed to make me glad with visions of the galaxies, and notice in the glass a dim reflection of my face and say:”Now I am happy, I am loved?” How could I stand before the setting sun, between the mountain range and the vastness of the sea, and think that everlasting joy should come from making much of me? . . . “
(Don’t Waste your Life, John Piper, 2003, p.186.)

What this really boils down to is love of humanity, humanity exalting itself in bold denial of the Creator, saying ‘all this can exist and be sustained simply by the ingenuity of mankind’ – or by the evolutionary process, which apparently needs no initial designer (?!).

How sad to be so in love with the shadow of the Creator, that a relationship with the Creator is fortfeited, the Creator in whose image we are made, the Creator whose love and sense of right and justice and compassion lives in us as a testimony to his character – even if we deny him.

If this is a struggle for you, please check out my older post on a similar topic: https://sevennotesofgrace.com/2013/07/01/an-unwasted-life-makes-much-of-jesus/

I trust and pray you can see the God who created and sustains this universe, by His living and eternal Word, Jesus Christ. Faith in him will never disappoint!

2 thoughts on “Lost in worshipping the created”

The Philosophy Blog of Steven Colborne